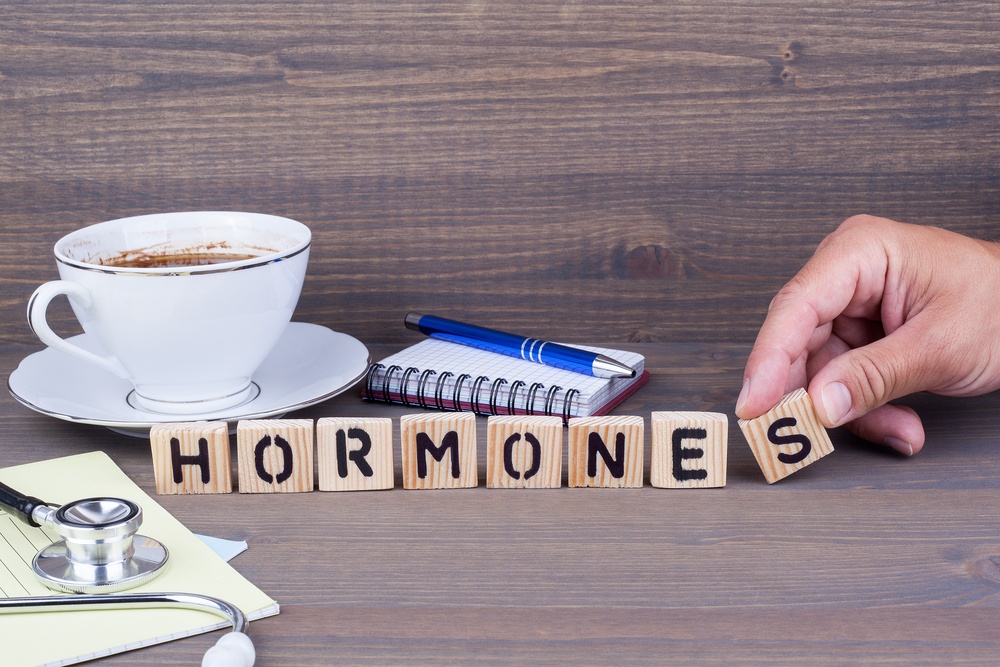 CBD oil has a number of great benefits attached to it. Research has shown that it can help with anxiety, reduce seizure activity, treat certain skin disorders, and even help fight cancer in some cases.

It has become especially popular with women, who are using it to treat a number of specific issues, such as PMS, cramps, menopause symptoms, and hormonal imbalance.

But how does it work, and what effect is CBD having on our hormones?

These cannabinoids work within the body's Endocannabinoid System, by binding to a vast network of receptors that are located all over the body. These compounds work to help reduce inflammation and maintain homeostasis, among other things.

The majority of the CBD oil that is on the market comes from the industrial hemp plant, as it is naturally very low in THC, which is the compound present that produces a "high". The hemp plant is also much higher in CBD content than the marijuana plant, which makes it ideal to use when it comes to making CBD oil.

When talking about CBD oil and hormones, you need to have an understanding of the Endocrine System, the different glands that are contained within, and the effects that hormones have on our bodies.

The Endocannabinoid system plays a central role in regulating numerous systems in the body, including the Endocrine System.

Made up of all the glands in your body that produce hormones, the Endocrine System serves as a messenger system. It is responsible for hormone production and regulation, telling them where to go, and what to do when they get there. 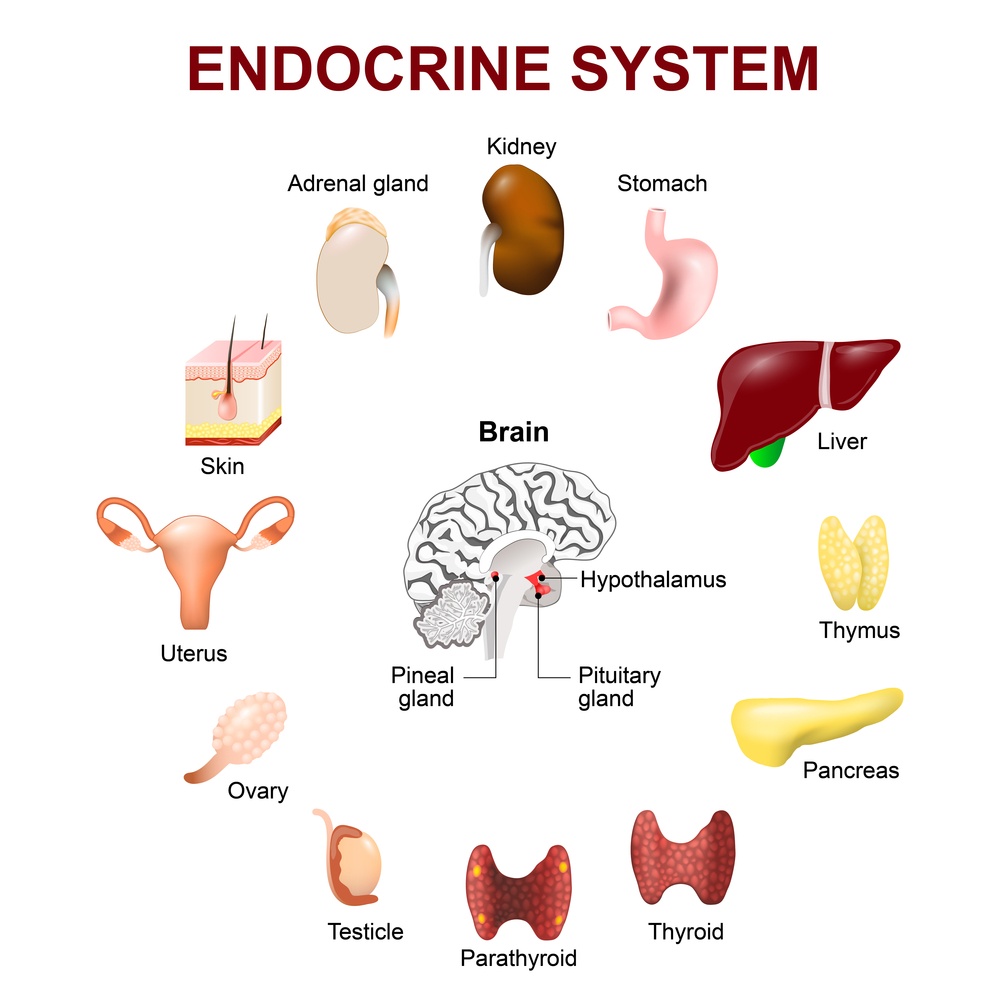 When the Endocrine System is functioning at a high level, everything runs smoothly. When it's not, it can lead to serious health complications.

It maintains many important bodily functions such as respiration, metabolism, reproduction, motor function, sexual development, and growth, and even a slight change can have a big impact on your health. 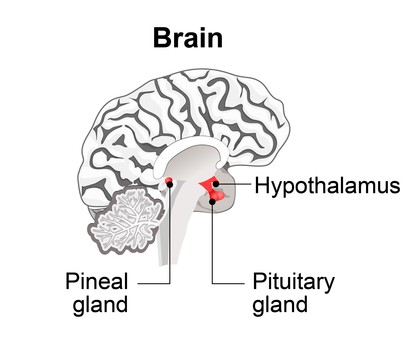 Located near the base of the brain, the hypothalamus is a small gland with a big job. It works very closely with the pituitary gland, and is responsible for telling it to start or stop producing hormones.

It has a part in controlling appetite, sexual behavior, emotional response, regulation of body temperature, sleep cycles, and more.

When an issue arises in the body, signals are sent to the hypothalamus, which in turn responds by releasing hormones to the pituitary glands, whose role is to direct most of the other glands.

Another very important part of the system, the pituitary gland is located directly below the hypothalamus. This gland secretes growth hormone, prolactin(helps make milk in pregnant and breastfeeding mothers), follicle stimulating hormone and luteinizing hormone(known as the gonadotropins). In males this stimulates sperm production, in females egg production, and in their respective sexes stimulates the production of sex hormones, estrogen and testosterone.

The pituitary gland receives hormones from the hypothalamus, which responds by releasing its own hormones and activating or inhibiting the other glands and/or organs in the system. It is often referred to as the master gland because of the control it has on the rest of the glands in the system.

The only hormone that the pineal gland secretes is melatonin. This hormone is responsible for regulating your circadian rhythm, known as your body's internal clock. This hormone is what signals you to feel tired or alert at certain times in the day.

Light exposure stops the production of melatonin, while darkness triggers it. It's part of the reason that night shift workers who are naturally exposed to more light during a 24-hour cycle can have more issues with sleep patterns, and other health issues.

An interesting fact about melatonin is that it blocks the secretion of the gonadotropins, which are the hormones that regulate the function of the ovaries and testes.

Simply put, too much or too little melatonin can have negative effects on the reproductive system, which in turn can effect the rest of the system. 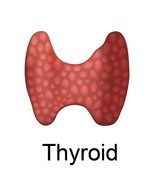 This gland is directly in charge of your body's metabolism, and the hormones that it makes determines the speed at which your metabolism runs.

Your metabolism is how your body uses the energy it receives.

Depending on the hormones that your thyroid is or isn't producing, you can have a slower or faster metabolism. A slower metabolism can cause some to gain weight faster, and have lower energy levels.

The thyroid produces two main hormones: Triiodothyronine (T3), and Thyroxine (T4). Too much or too little of these hormones can cause two opposite conditions, hyperthyroidism or hypothyroidism.

Hyperthyroidism - This is when your thyroid produces too much of the T3 and T4 hormones. It can cause people to have anxiety, nervousness, excess sweating or higher temperature, hair loss, hyperactivity, and missed or light periods in women.

Hypothyroidism - This is when your thyroid produces too little of the T3 and T4 hormones. People with this condition can experience fatigue, depression, trouble sleeping, dry skin, joint pain, and prolonged heavy bleeding in women. 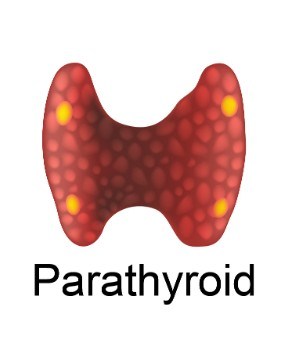 This is a set of four glands located behind the thyroid gland.

While the names are similar, the functions are different.

The parathyroid releases parathyroid hormone (PTH), which is in charge of how much calcium in the blood.

Calcium is widely known for its importance in strong bones, and overall bone health. It also has effects on the nervous system, and is used for energy in muscles.

Too much PTH in the system can cause kidney stones, and also cause people to feel depressed, lacking energy, and can even impact memory function.

Too little of this hormone can cause bone and teeth issues, muscle spasms, cataracts, headaches, heart problems, as well as mental health issues.