Looking for answers about CBD oil? Well, you've come to the right place!

In this article we are going to be going over the basics of CBD, what CBD is, where CBD comes from, and how it can help you.

By the end of it, you should have a pretty good handle on things, and the answer to the question, what is cannabidiol?

With all the hype around CBD oil lately, the question comes up a lot. Until fairly recently, there hasn't been a lot of research done in this area, and there are still quite a few unknowns surrounding it.

Cannabidiol(CBD), is just one of over 100 different phytocannabinoids found in the cannabis plant. It is also abundant in the industrial hemp plant, where most of the world's CBD oil is sourced from.

It's important to understand that CBD can be sourced from both hemp and marijuana, but the THC(tetrahydrocannabinol)content will vary greatly depending on which one it is sourced from.

While both cannabinoids have medicinal purposes, CBD does not have any of those effects. It is generally considered safe and non-addicting, even at high doses.

For anyone who might be a little hesitant when it comes to marijuana, CBD is a great option. CBD oil can also contain many other beneficial nutrients and terpenes, depending on what type you decide to go with(more on that later!).

WHERE DOES CBD OIL COME FROM?

The first discovery of CBD was made by Roger Adams, along with his team at the university of Illinois. At the time he was completely clueless as to what he had discovered, and it wasn't until years later that the significance was realized. That's when the real research started.

To fully understand where CBD oil comes from, you need to understand the relationship between the marijuana plant and the hemp plant.

Both of these plants come from the same family, Cannabis. It has two primary classifications, Indica and Sativa. The hemp plant is part of the Cannabis Sativa family, while the marijuana plant can be classified as either of them.

As detailed above, hemp is high in CBD, and low in THC. It is typically grown for industrial purposes, and used in many ways, including clothing, rope, food, bio plastics and much more!

Because of its close relationship with marijuana, many people believe hemp to be the same thing, when that is the furthest thing from the truth.

The majority of the world's CBD oil comes from the industrial hemp plant.

WHAT IS CBD OIL MADE OF?

CBD oil is obtained by extracting all the beneficial things that the plant has to offer. Depending on the extraction method used, the THC and some terpenes can be removed from the final product.

Full spectrum oil has absolutely everything possible included in the plant, while Broad spectrum has the THC removed. This can be an option for people who can't have THC due to drug testing, THC sensitivity, or other reasons. Another option is CBD isolate, which contains only CBD, nothing else.

There are many other beneficial cannabinoids within the plant, it doesn't just end there. 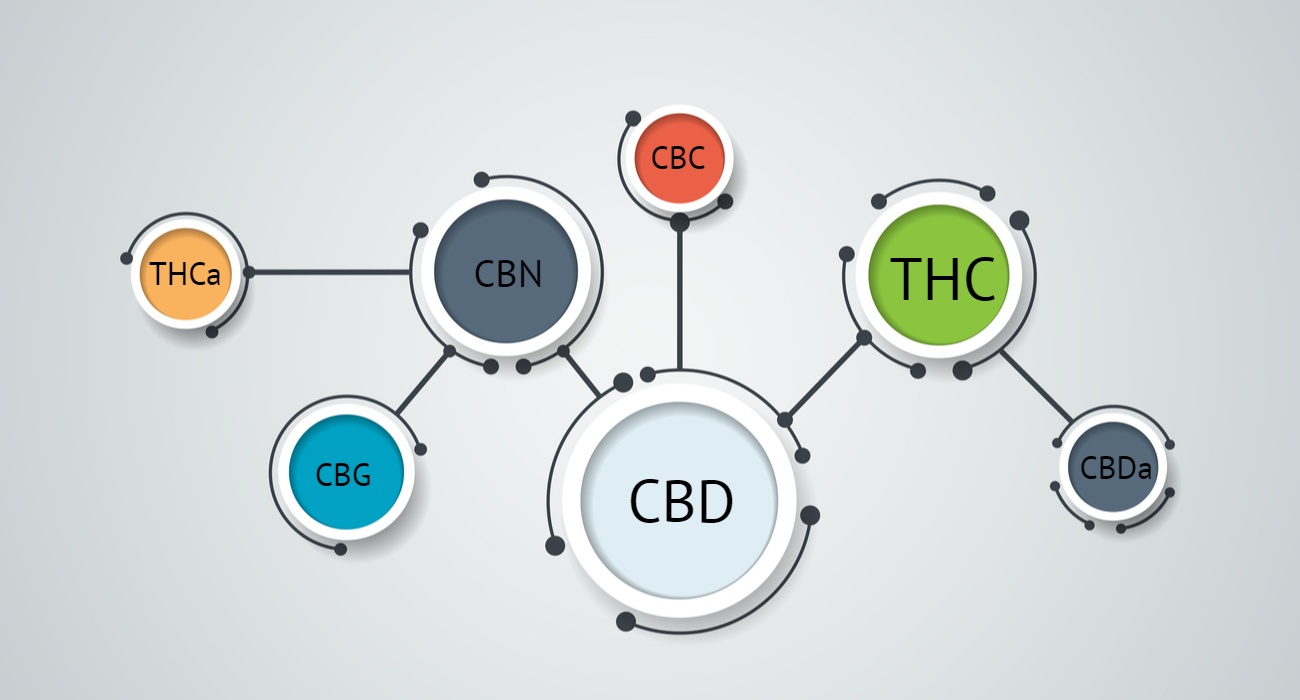 There are a number of different carrier oils that are used to make CBD oil, and some companies add in extra terpenes, vitamins, or other beneficial nutrients depending on what they are trying to target.

CBD is sourced from many places around the world, but the most important thing is that it is organically grown and manufactured. The hemp plant is a bio-accumulator, which means it has the ability to suck up any toxins or pesticides during the growth stage.

WHAT IS THE ENDOCANNABINOID SYSTEM?

First discovered in the 90s by Dr. L.A. Matsuda, the Endocannabinoid System is an extremely important part of the body.

Described as an intricate network responsible for maintaining homeostasis, this system keeps everything in check. What scientists discovered was there were countless cannabinoid receptors within the system, and so began the search for the body's own cannabinoids. 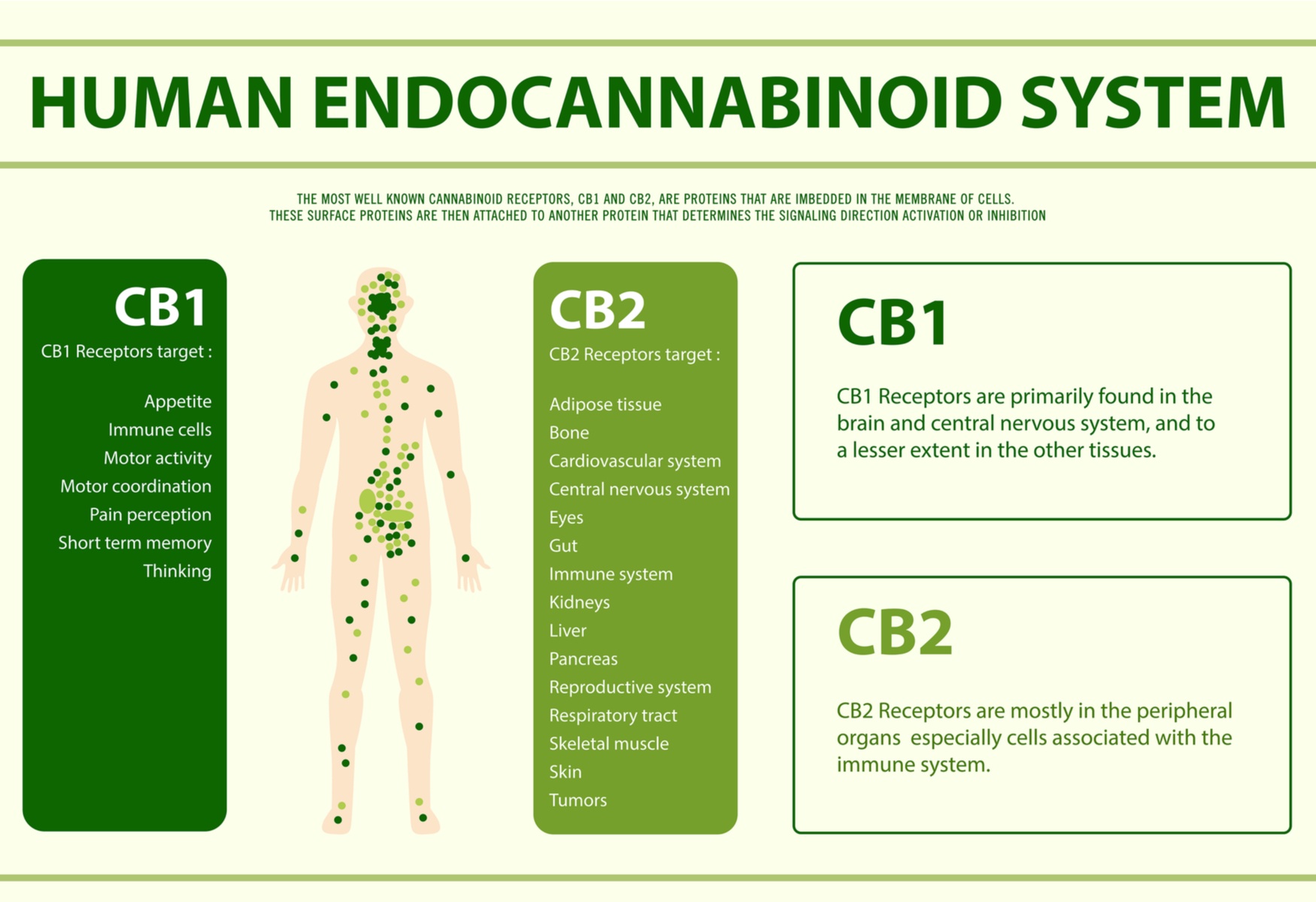 The two main receptors that have been studied are CB-1 and CB-2. CB-1 is found in the bodies peripheral and central nervous system, while CB-2 is found in abundance in the gastrointestinal and immune system.

CBD oil works by binding with these specific receptors, and is the reason behind why it seems to work for so many ailments.

WHAT DOES CBD OIL HELP WITH?

Chronic Inflammation has been linked to various ailments, and has been theorized to be the root cause of all disease. Once believed to be an important part of the body's response to injury or infection, inflammation is now being more closely studied in its role behind disease.

CBD oil, along with the other cannabinoids, work within the body and Endocannabinoid System to reduce inflammation, and due to the unique way it interacts with the receptors in the ECS, may have numerous other beneficial uses.

Being that a lot of the research is still in the preliminary stages, it will take some time to fully understand CBD and all that it is capable of.

Being that a lot of the research is still in the preliminary stages, it will take some time to fully understand CBD and all that it is capable of.

From Epilepsy to Asthma, CBD oil is currently being used to treat numerous diseases and disorders. Some have extensive research backing it up, while others do not. A list of some of the things that CBD may be able to help with:

By no means is this an exhaustive list, there are many other areas that CBD is showing promise in.

When first starting out with CBD, the terminology can be pretty confusing. Here are some terms that you need to become familiar with.

Full Spectrum - This type of CBD oil contains absolutely everything beneficial that the plant has to offer. All cannabinoids, terpenes, and flavonoids are left intact, and contribute to the "Entourage Effect". Full Spectrum CBD oil contains traces of THC, and should not be used by anyone who is drug tested.

Broad Spectrum - This type of CBD oil has the majority of everything you're going to find in Full Spectrum CBD oil, but the THC has been removed. You still get most of the benefits of the plant, but keep in mind that THC has a whole host of benefits.

Isolate - This is 99.9% pure CBD that has been isolated out of the plant. It is THC free, and contains only CBD and no other cannabinoids, terpenes, or other plant matter.

Entourage Effect - This is the term that is used when all of the parts of the plant work better and more efficiently together than they would as separate parts. Different parts of the plant serve to boost the other's effects in the body, and Full Spectrum is widely considered the best option to go with when using CBD oil.

COA - This is a certificate of analysis, and one of the most important parts of buying CBD oil. Simply put, if the company doesn't provide this, look elsewhere. This is where you go to see the cannabinoid content, toxins and heavy metal levels, pesticide count. These tests should ALWAYS be performed by a third party laboratory, not affiliated with the company.

Terpenes - This are essentially the oils within the cannabis plant that give it it's unique scent and flavor profile. They also have multiple different health benefits as well.

6 thoughts on “What Is Cannabidiol? CBD Oil Explained”

Read reviews from users of these popular brands , or leave one of your own!